The drama starring Richard Gere, Jodie Foster, and Bill Pullman is now up for pre-order.

In an early announcement to retailers, 20th Century Fox is preparing 'Sommersby' for Blu-ray on August 11.

Set after the civil war, a man returns home several years after he was presumed dead. He arrives armed with ideas and vigor, and soon brings his town back to prosperity and turns his once bitter marriage into a passionate romance. despite his many accomplishments, suspicions arise that Jack Sommersby may not be the man he says he is, after all.

You can find the latest specs for 'Sommersby' linked from our Blu-ray Release Schedule, where it's indexed under August 11. 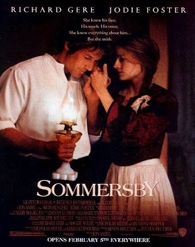 Discs mentioned in this article: (Click for specs and reviews)
Sommersby (Reissue) (Blu-ray)