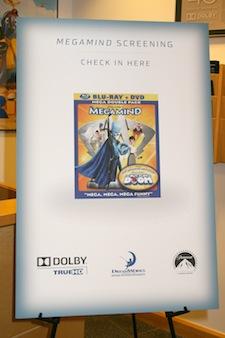 High-Def Digest Goes Behind the Scenes of 'Megamind' in 7.1 Dolby TrueHD

Last week, 'Megamind' became the first 7.1 theatrically mixed film to be released on Blu-ray with a 7.1 Dolby TrueHD soundtrack. Some are unhappy with the disc's video (banding in the sky, and aliasing around costume and hair textures), but I think we can all agree the TrueHD soundtrack is a winner.

Dolby and Paramount Home Entertainment were kind enough to invite High-Def Digest to a small screening of 'Megamind' to talk 7.1 There was also a Q&A with Erik Aadahl, the film's supervising sound editor. Erik is a literal genius who turned down Yale and Stanford to go to USC film school, and has worked on some of the best soundtracks of the last five years, including: 'Shrek Forever After', 'Transfomers: Revenge of the Fallen', 'Monsters vs. Aliens', 'Valkryie', 'Kung Fu Panda', 'Transformers', and 'Superman Returns'.


But before we jump into 'Megamind' and the process of creating its soundtrack, I need to say one thing:

I love 7.1 with ever fiber of my nerdtronic high definition soul.

The proof for me came last fall when I went up to San Francisco to play in Dolby's sandbox. There, in perhaps the best sounding auditorium I've ever experienced, we saw the demos Dolby had previously used to convince Pixar and theatre owners that 'Toy Story 3' should be the first ever theatrically mixed 7.1 movie in history. Who knew how much extra immersion and precision could come from two additional channels directly behind one's head where our ears are supposed to be less acute? My conclusions were immediately backed up when, in another demo, we dropped back to 5.1. Missing the extra channels, missing that extra depth and control, the mix sounded flatter and further away. I was sad.

Needless to say, in a few short minutes, I was ready to sprint home -- all 500 miles -- and buy two more speakers.

My wife nearly cut up the credit card.

Thankfully, she did the smarter and more loving thing: she bought me two more speakers for Christmas (Best. Present. Ever.). I was quick to drop in 'Toy Story 3', as well as a host of mostly Lionsgate and New Line Cinema Blu-rays originally mixed in 5.1, only to be remixed into 7.1 for Blu-ray (a process we learned about from our good friends over at POP Sound).

Which brings us back to DreamWorks Animation's 'Megamind'…

We watched the 'Megamind' Blu-ray on an 18-foot wide screen (10.5-feet tall), running through an NEC 2K DLP projector. The Blu-ray picture looked almost as good as when I saw 'Megamind' in the theatre. But it sounded better. How? Oh, I think you already know: 7.1 over 5.1.

There are currently 1,300 cinema screens around the world (not enough) with Dolby 7.1. Ten films have been mixed for the format (again, not enough), but sound professionals like Erik Aadahl don't have any 5.1 currently on their rosters (he's working on 'Kung Fu Panda 2' next).

While some mixes are adjusted between theatrical and home theatre environments (dynamic range, etc),the 'Megamind' Blu-ray features, bit-for-bit, the exact same mix as Erik heard in the mixing stage; the same mix heard in the cinema. No changes. Straight from the professionals with the full dynamic range intact. These are fun times, dear readers.

But how do they do it?

Erik starts all of his projects (as we can see, they are mainly studio tent poles) gathering his Palette of Sound. In cooking terms, these are his ingredients. Some sound designers work with "canned food," or pre-recorded sounds (they have to for many budget ranges). Not Erik. Every sound he uses is signature to each movie. And to do this, he takes a few months building that Sonic Palette before ever working with animation or live action footage.

'Megamind' is about a quirky main character whose schemes often fail; Erik's soundtrack was designed from the ground up to help tell that story. Also, Jeffrey Katzenberg said that he wanted the film to sound "charming." So, quirky and charming. How can sound be those things?

Erik says he likes to find sounds with inherent "personality", as well as those that can "play." In terms of personality, Erik has a kitchen cabinet at home in desperate need of WD-40, but he's never fixed it because he enjoys its squeak. In fact, what would be an annoyance to most ears became the basis for the character Frenzy in the first 'Transfomers' film. In terms of playability, Erik likes to use sounds and devices that can be manipulated to communicate emotions and feelings.

How about an example?

Great idea. Erik brought two miniaturized versions of sound generators he used in the movie and played a couple clips to demo them, as well as the Blu-ray's use of 7.1.

Second, there is a moment in the film where Megamind blows up an observatory using "all the power of the sun." This sound was directly inspired by Ben Burtt's work on 'Star Wars.' But instead of using high tension wires as Burtt did, Erik coiled hundreds of feet of copper wiring, which he was able to 'ping' and amplify as needed (again, seen in her miniature form).


Check out Chapter 4 of your 'Megamind' Blu-ray (00:15:57 – 00:20:20) to hear the pinging copper coil, as well as some great use of the surround back channels as the camera changes POV from looking directly at the explosion, to having the explosion taking place behind camera.

Another important general concept was how sound can define characters. Megamind has already been described as quirky, his sounds being slightly off. Case in point, in his origin story, Megamind's spaceshift putters along, almost breaking down. Metroman, conversely, is in a mini Cadillac, which runs smoothly.

Last on our list of interesting factoids for the day was how 3D can affect the sound mixing process. Erik and his team, when doing a 3D film, do most of the work in 2D, and then watch their work playback in 3D, taking notes. In 3D, Erik found his eyes going to different screen locations and actions compared to the 2D version, so he had to make a few adjustments to line up things back up with the picture. In some cases, 2D and 3D versions of the same film will have slightly different editing choices, and thus completely separate sound mixes.

All-in-all, it was great to learn a little more about how 'Megamind' was built into a very fine 7.1 Dolby TrueHD soundtrack. I wish every Blu-ray sounded this good. Thanks again to the folks at Dolby and Paramount Home Entertainment for a fun morning (even if it was in the valley).

What do you say, dear readers? What do you think about the 'Megamind' 7.1 track? How many of you own a 7.1 system, or are interested in owning one? If you don't have one, why not? Have you sought out Dolby 7.1 Theatres? And, what's your favorite 7.1 Blu-ray so far? Hit up the forums and let us all know.