Everything old is new again. And it’s not even stuff that’s all that old.

In fact, a pair of ’80s favorites are getting the big screen, big budget remake treatment this weekend. Meanwhile, I continue to toil away on my screenplay for ‘Rubik’s Cube: The Motion Picture.’ (Spoiler alert: there are space aliens!)

The biggest, most expensive, and loudest 1980s-rescued movie this week is ‘The A-Team,’ which was reviewed by yours truly earlier today. In a nutshell: the film (which stars Bradley Cooper, Liam Neeson and Wikus van de Merwe) is good dumb fun for the most part; but the last act squanders a lot of that goodwill in a cacophony of special effects and franchise-starting moments that make you want to roll your eyes. (It also emphasizes how little content and how much junk the movie is really made out of). Even though the movie was based on a series that ran for five seasons back in the early ’80s, you’ll be perfectly happy with this one movie, thank you very much.

The other big opening this weekend is the glossy remake of ‘The Karate Kid.’ First, a note about the title: It shouldn’t be called ‘The Karate Kid.’ Karate is a Japanese form of martial arts, but this movie is set largely in China and stars legendary Chinese action star Jackie Chan. So it should be called ‘The Kung Fu Kid.’ In fact, it was called that for a little while during pre-production and production. Then the studio (Sony) felt iffy about selling this movie without a major American movie star (the little kid is Jayden Smith, son of Will) and without its original title. Sony is hoping that goodwill from the original film will fill up theaters across the country. And this is with a running time of 2 ½ hours! Jeez! It currently has a so-so rating of 60 on Metacritic. I’ll be seeing it this weekend and filing my review accordingly.

Beyond that, there’s an incredibly well-received indie making its way to select theaters with an incredibly bad title. ‘Winter’s Bone‘ is a “naturalistic thriller” set in America’s rural south that made a splash at Sundance this year and is opening in limited release this weekend. I missed my screenings and am kicking myself for it, especially considering that it has a 92 rating on Metacritic. That makes it the best reviewed movie of the year thus far, besting independent favorites like ‘A Prophet’ and ‘Exit Through the Gift Shop,’ and even well-received major titles like ‘How to Train Your Dragon.’ There’s good, and then there’s 92-on-Metacritic good. 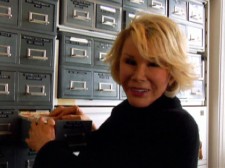 The other little movie stirring up press is the Joan Rivers documentary ‘A Piece of Work.’ It played Tribeca (missed it, of course) to rapturous reviews and seems to be continuing with the accolades as it heads into theaters. Supposedly, it’s a poignant, funny, tragic little documentary that nakedly reveals the ups-and-downs of the famed entertainer. Also, I expect there are a bunch of jokes about her ghastly plastic surgery, which should be pretty funny. Me? I’ll always remember her groundbreaking work in ‘The Muppets Take Manhattan’ as a career highpoint.

So, maybe it’s time to side-step the multiplex and go to the arthouse? There are other good movies out there, too. Movies like the charmingly curious ‘Micmacs’ or the aforementioned street art documentary (or is it?) ‘Exit Through the Gift Shop.’ But don’t take my word for it. Go find out for yourself. ‘Shrek 4’ doesn’t need your money.