The month of August is affectionately known as the “dog days of summer.” Allegedly, this has nothing to do with actual dogs. Theory has it that the term was coined in relation to the star Sirius (the “Dog Star”) reaching its closest proximity to Earth. Nonetheless, this puts me in mind of famous movie dogs, which have been a source of both drama and comedic hijinks since the birth of cinema. For today’s Roundtable, we’ll give you our picks for filmdom’s greatest canines.

He’s a shameless ham, the star of several completely extraneous scenes involving Jack Nicholson playing piano, and my god does he ever eat too much bacon, but I still love Verdell, Greg Kinear’s dog in ‘As Good as It Gets‘. With his seemingly always-dirty face and his over-the-top cuteness, that dog has me wrapped around his little paw. During the scene in which his owner is attacked and beaten within an inch of his life, Verdell’s terrified, true-to-life reactions really tug at my dog-adoring heart strings.

My all-time favorite cinematic canine would have to be Rowlf the Dog from the various ‘Muppet‘ movies. C’mon, Rowlf has a terrifically dry sense of humor. He hardly ever loses his cool despite all the havoc being wrought around him, and he’s a heck of a pianist. Show me another dog that can belt out a barbershop quartet rendition of “Smells Like Teen Spirit” and maybe I’ll change my answer. Until then, Rowlf gets my vote.

By stupidly placing more thought on contemporary movies rather than classics, I somehow almost forgot my all-time favorite canine. I’m a dog-lover, through and through, and my favorite breed is the American Pit Bull Terrier, the same that my idol Humphrey Bogart loved. I fell in love with the breed because of “Pete the Pup,” the famous Pit Bull with the ring around his eye from the classic comedy short-film series ‘Our Gang‘. Pete was known for working well with the kids. He could do several awesome tricks for the screen, and was responsible for much of the humor in any episode that featured his beautiful mug. Pete was the best dog ever, and it’s his fault I won’t ever buy another breed.

I’m not an animal lover. That’s not to say that I’m a hunter or anything like that. I simply want nothing to do with 99% of the animals in existence. Having said that, I’ve liked two dogs in recent cinema, one animated and one live-action. Both were enjoyable for the same reason: the dogs were humanized. Which dogs? Snowy from ‘The Adventures of Tintin‘ (a.k.a. Milou, if you know the comics) and Uggie from ‘The Artist‘. Give me humanized side-character canines and I’m happy. Make me watch ‘Beverly Hills Chihuahua’ or ‘Marley & Me’, and I’m an unhappy camper.

I finally gave in and watched ‘Best in Show‘ after hearing various bits of the movie repeatedly played on the ‘Tony Kornheiser Show’. The movie is hilarious, and full of funny-because-it’s-true ridiculous and realistic dog owners. “Beatrice” is a Weimaraner whose owners are so neurotic that they continually treat the impassive dog as though she were an emotional time bomb. The movie begins with the owners supposing that Beatrice has become emotionally unstuck as a result of having witnessed them attempt something from the ‘Kama Sutra’. Later, the couple nearly come to blows after losing what they feel is Beatrice’s only lifeline, a toy called Busy Bee. As an animal lover and a pet owner, I can’t help but pity the pet of crazed owners.

I’m not a dog person. I’ve always been a cat person. This Roundtable is unfortunately timed. I sent out the topic to staff last weekend. In the meantime, my cat Max unexpected passed away on Wednesday. I’m not really in the mood to think too much about dogs at the moment.

Since my first pick of Uggie from ‘The Artist’ was already mentioned above, I’ll throw out some honorable mentions to Einstein from ‘Back to the Future‘ (the world’s first time traveler!) and Baxter from ‘Anchorman‘ (he can talk to bears!). The banner image on top of this post is Samantha from ‘I Am Legend‘, who is another good choice.

Go ahead and tell us your about favorite movie mutts in the Comments. 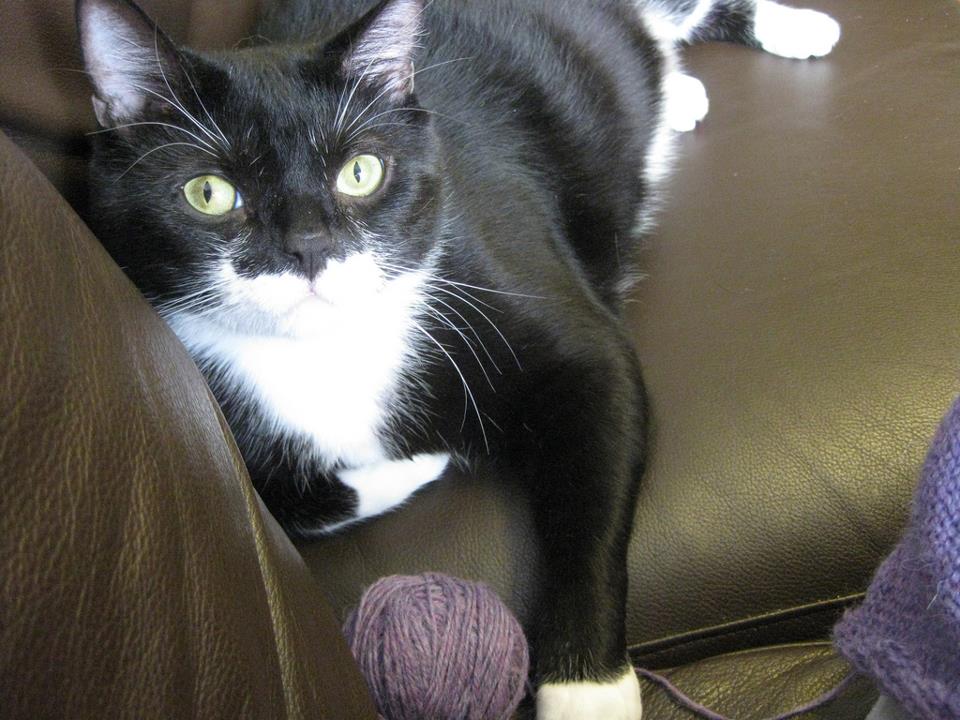 R.I.P. Maxwell. You were a troublemaker to the end, but we love you.