When it comes to the depiction of computers or the internet in movies and TV, Hollywood screenwriters almost universally have no concept at all of what computers do or how they work. Pretty much any time you see a computer in a movie or TV show, it does something ridiculous, illogical or flagrantly impossible. In today’s Roundtable, we take a look at some of the most laughable examples of stupid computer nonsense ever portrayed on screen.

For the longest time, the only computers that I’d ever owned were PCs. I was thoroughly surprised when I got my first Mac and learned that my external hard drive would not function on it. (The drive had a PC-only formatting, so it had read-only functionality on the Mac.) If a hard drive’s factory setting could only work with one operating system, how in the hell is the virus that the Fresh Prince and the Fly upload to the alien mothership in ‘Independence Day‘ supposed to work. It’s not only laughable that the virus works on this new OS, but that our two unlikely heroes are able to understand the language that pops up on the alien dashboard. And how does one connect a Earth PC to an alien system? Is there an app for that?

By far, the worst use of a computer is in the hacking-crime actioner ‘Swordfish‘, a ridiculously dumb movie about supposed tech wizards performing a perfect bank robbery. It would have been one thing if the filmmakers simply stuck to scenes of characters sitting behind computers, tapping randomly on keyboards. But no, director Dominic Sena just had to point the camera directly at the computer screen to show what the so-called hackers were typing, which is actually a bunch of nonsensical codes, numbers and totally random words that mean nothing at all. It clearly demonstrated how very little knowledge the filmmakers possessed about computers and how the internet works. It was laughably bad then, and it remains hilariously stupid today.

All the way back in 1993 when ‘Jurassic Park‘ roared into theaters, I didn’t know any better. A bug-eyed Lex Murphy cooed, “It’s a UNIX system. I know this,” and I rolled right along with it. As far as I knew, computers running UNIX obviously had file systems that you navigate by running around in 3D space like some kind of ‘Wolfenstein’ knockoff.

It wasn’t too long after seeing ‘Jurassic Park’ for the first time that I started getting heavily into UNIX. Close to twenty years later, you’ll hardly ever see me at a computer without a bunch of PuTTY sessions open. Still, this is what ‘Jurassic Park’ had me expect: 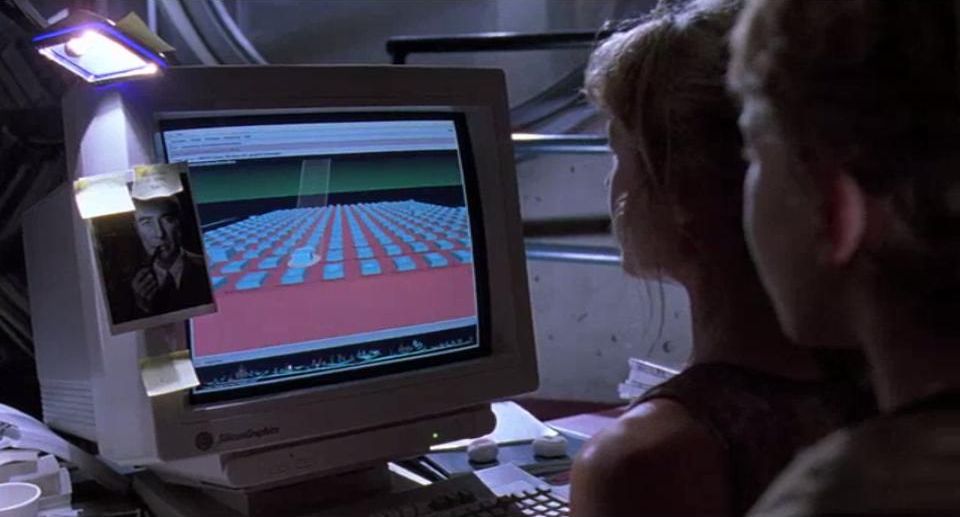 …and this is my sad reality: 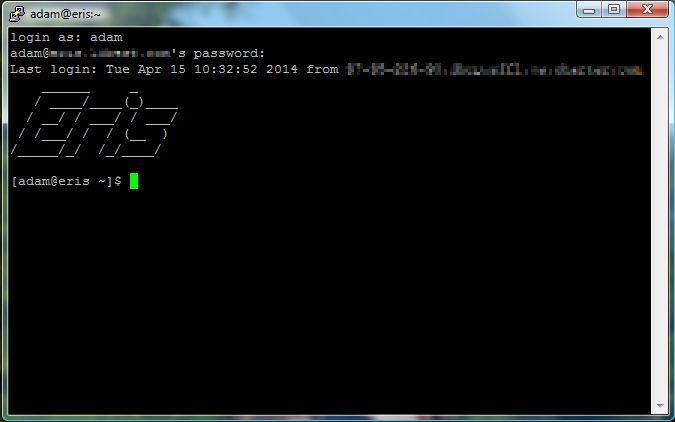 To be fair, that is a real file browser in ‘Jurassic Park’, although I don’t know anyone who actually used “fsn,” and I’m not sure how a 14-year-old or whatever would know so much about a cumbersome novelty that only ran on exotic Silicon Graphics workstations. (Heck, even when I spent a semester in front of SGI gear for a 3D programming course in college, we never used anything like that.) If you have velociraptors breathing down your neck, you’re way better off hacking away at the command line instead.

I’m going to focus in on this screengrab from 1994’s ‘Clear and Present Danger‘: 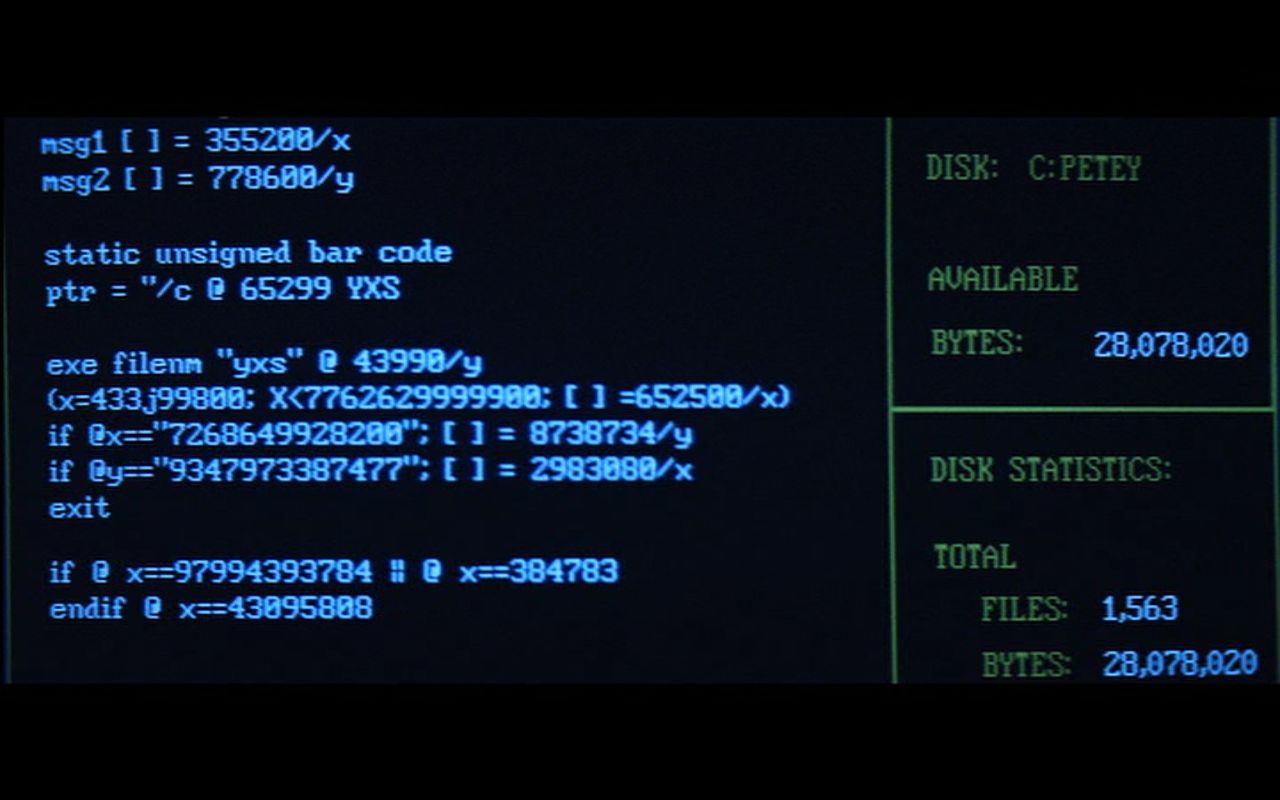 The coding problem presented begins as a request for a “way beyond birthdays” user password, and ends with shadow access to said user’s terminal. (At least it would be shadow access if not for Petey forgetting to explain to Ryan that he needed to wait due to an instant “User 422 Logged On” message, which in movie fashion is for the best since Ritter is deleting files, or at least filenames.) Most of the characters on Petey’s screen are already there when Petey starts writing his special program, which seems to be built on some arbitrary containers and unrelated function outlines.

While the ensuing scene with Ritter and Ryan is great fun and part of a good yarn, Petey and his special program are as trope-worthy as anything I’ve ever seen. (I do still like the movie.) With that example as a basis, it’s no wonder that movies and shows have exploding computers, 60-second hacks, and endless instantly-parsed databases of all conceivable information.

Looking back to 1957, ‘Desk Set‘ is a lovely movie that shines with Spencer Tracy and Katharine Hepburn’s chemistry and witty repartee. However, the elephant in the room is a super computer that Tracy’s character has built to provide reference information traditionally handled by the research department headed by Hepburn’s character. Looking at it today, it seems silly that the staff were so concerned for their jobs, because we know that the technology was decades away. Heck, even though you can search just about anything on the web these days, there’s still lots of work to be done for computer programs to understand questions and return accurate results. (Siri, I’m talking to you.)

Actually, kids today probably wouldn’t get this mistake because they’d assume that computers back then could do all the stuff they do today and were just bigger. They’d probably be more confused by the big cabinets that held all those index cards.

The thing that really causes me to grit my teeth into calcium gravel are the incessant noises that computers make in movies. You know what I mean. Whenever a character types or clicks anything into a desktop PC or laptop or super mainframe, the gestures are always accompanied by ridiculous aural punctuation, from beeps to blips to tweets to twits. The first example that comes to mind is actually from one of my favorite films of all time: Ridley Scott’s ‘Alien‘, in which the intelligent onboard operating system Mother sounds off with a harsh bray of electronic sound after any inputted keystroke. Other examples are everywhere. Even James Cameron’s sequel ‘Aliens’ is guilty of this audio crime. (At least the sound effect is less abrasive there.)

These unnecessary bleeps and bloops are so prevalent in movies that when I come across a film that doesn’t resort to them, it’s like a gift from the gods. “You’ve trusted me as a viewer to understand that in reality, data input on a computer is mostly silent! Hallelujah!” So knock it off, Hollywood! We know what you’re up to, and we’re smarter than you think we are. We actually use computers every day. We know what they sound like.

I can think of so many good examples for this that I hardly know where to begin.

‘Mission: Impossible‘ – Ethan Hunt (Tom Cruise) needs to make contact with a mysterious agent going by the name “Max,” who can only be reached via USENET for some reason. With only a reference to a Bible verse to go by, he peruses religious newsgroups and sends dozens of emails to the nonsensical address “[email protected] 3:14.” Posting private emails in a public newsgroup? Nothing about this scene bears any resemblance to how USENET or email actually work.

‘Terminator 3: Rise of the Machines‘ – The evil Terminatrix cyborg spreads a computer virus that allows her to take over any computer in the world. She can even remotely control cars and construction equipment she sees on the street. Wait, what? Although it’s true that most cars today have computers in their engine blocks, those computers can’t (or at least couldn’t in 2003, when the story is set) turn the steering wheel or press down the gas and brake pedals to drive.

‘The Running Man‘ – In this dystopian future, cutting-edge computer hacking consists of typing the same single-line DOS command into a terminal repeatedly until it finally takes.

‘The Lawnmower Man’ – This whole movie, from start to finish. Moronic.

‘Harsh Realm’ – The premise of this short-lived sci-fi series from ‘X Files’ creator Chris Carter involves a Virtual Reality military combat simulation program that was created “using the 1990 census, satellite cartography and other classified data,” forming a perfect replica of the real world down to every man, woman and child. Apparently, this extends to ridiculously specific details, such as when the main character visits the bombed-out shell of his parents’ house and finds his favorite childhood snowglobe. I bet if he looked for them, all the porn magazines he hid in his closet as a teen and never told anybody about would be there as well. Computer-generated “Virtual Characters,” based on the likenesses of real people, even seem to share their real world counterparts’ thoughts and memories. Who knew Big Brother was watching so closely, and could read minds?

Finally, although we already mentioned this scene a few weeks ago, I had to post it again because it represents the absolute nadir of computer idiocy:

What’s the most ridiculous use of a computer you’ve seen in a movie or TV? Tell us in the Comments.