There would’ve been a whole lot fewer dead bodies if Papa had just written down a shopping list like he said he would. Instead, he waltzes into this party shop with no clue what kind of piñata he’s been tasked to buy. The guy figures he’ll cover his bases by picking up three of ’em instead. Surely his kid will be excited about whacking the heck out of one of these buggers, right? Just to be extra-extra sure, Pops even bribes the cashier into selling him the forbidden piñata behind the counter.

Don’t panic, though! His little boy’s birthday party ends without any casualties… unless you count that broken, battered piñata that’s now in the trash. No, the body count stands at zero until after Lindsay (Eliza-Jane Morris) breaks the news that she’s passing on the big family vacation. Hey, she’s in college and is totally an adult now! Lindsay is old enough to make her own decisions, like inviting a few pals over to the now-empty house, having a couple of drinks, and perhaps watching in horror as her friends are systematically murdered by a possessed piñata. 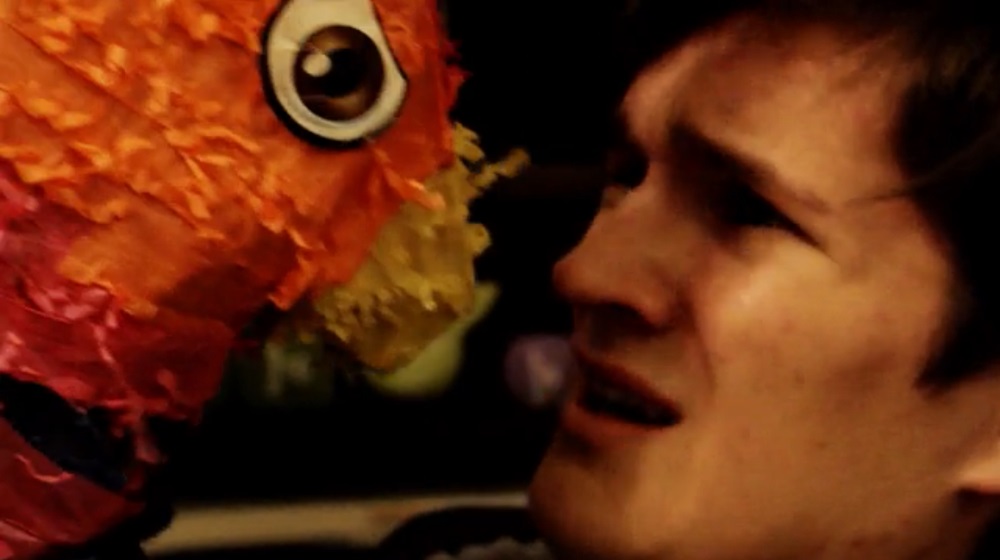 A piñata revenge flick is such an astoundingly brilliant premise that I kind of hate myself for not dreaming it up first. Does this sentient piñata tie up one of his fleshy captors and beat him to death until stuff gushes out? You know it. I even learned what a piñata defecates.

Better still, I can’t get enough of the way Killer Piñata skewers slasher conventions. There is, of course, that shot where the heroine breathes a sigh of relief, believing she’s finally bested her tormentor… as we the audience see the out-of-focus force of nature in the background rise once more. You know how these sorts of movies see a wounded killer limp away, and the Final Girl follows the trail of blood to put an end to his reign of terror once and for all…? The equivalent here in Killer Piñata genuinely made me laugh out loud.

There are so many jaw-droppingly amazing moments throughout Killer Piñata, from the Dead Rising-style weapon crafting montage to a howlingly interminable failed sex scene drenched in vomit. The tragedy is that pretty much all of ’em are in the back half of the movie. I can’t help but wonder how much more of a blast Killer Piñata would’ve been with a leaner runtime or a beefier budget.

The first forty-however-many minutes are mired in setup that isn’t exactly necessary. I mean, we’re talking about Killer Piñata here; its title tells you pretty much everything you need to know. So much emphasis is placed on Lindsay coming to terms with her sexuality that I figured it’d be more critical to her overall arc. That doesn’t really go anywhere plot-wise beyond making her ex-boyfriend (Billy Chengary) much more loathsome. It arguably plays a small role in setting up the movie’s most obscene-slash-gruesome gag, but… well, anyone who actually argues that isn’t trying very hard. 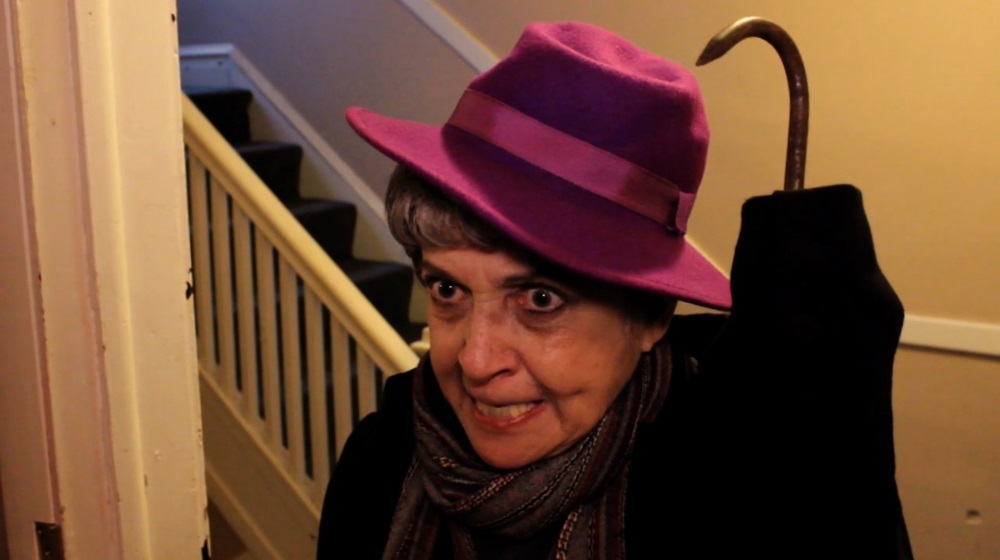 The nameless owner of the Dulcelandia party store (Joette Waters) steals every scene she’s in, flailing her hook hand around wildly. Killer Piñata isn’t really sure what to do with her beyond that. She pops up long enough to deliver some exposition and wreck the wrong party, but the flick’s best character is ultimately wasted.

I like most of the cast, actually. Lindsay Ashcroft is clearly having a ball as the sarcastic, randy best friend. I love how Eliza-Jane Morris seizes hold of those big, emotional moments and really gives it her all, even when she’s directing a monologue towards an off-screen assemblage of cardboard and shredded paper. These actors have what it takes to hold the audience’s interest even when they’re not sharing the screen with a, well, killer piñata. The screenplay just doesn’t flesh out these characters meaningfully or give them enough to do to fill its 90 minute runtime.

Crowdfunded to the tune of a princely $3,000, Killer Piñata doesn’t have enough cash to throw around to give it any real scope. With only five folks at Lindsay’s not-a-party, there are too few characters for this pernicious piñata to attack. The first on-screen kill doesn’t take place until just after the half-hour mark. The standout visuals – a couple of practical gore effects and an animated flashback – are all reserved for the final act. The titular creature, by and large, is brought to life by someone just off-camera shaking the other end of a piñata. I really could’ve gone for some extended piñata stalk-and-slash and more partygoers meeting ridiculous ends. More piñata in general, really. C’mon, it’s Killer Piñata, not Lindsay Comes of Age and Her Friends Are Having Sex but Where Does That Leave Her and Oh Yeah There’s a Killer Piñata Too Sometimes. 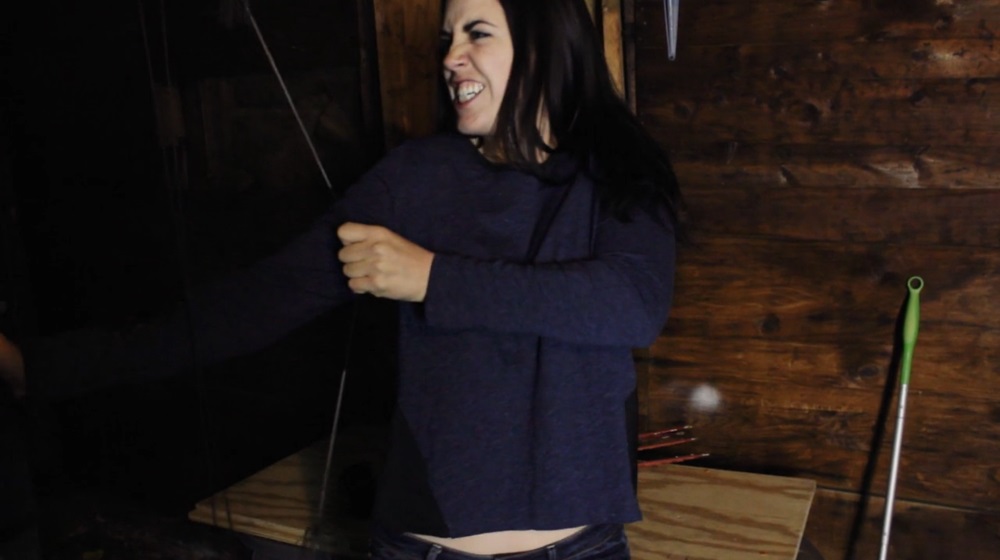 Between the excessive wheel-spinning, spotty sense of humor, and over-reliance on a single location, I can’t shake the feeling that this would’ve played better as a short or part of an anthology rather than a feature-length film. A movie titled Killer Piñata just really shouldn’t be this slow-moving or forgettable for so much of its runtime. Still, for anyone who saw that title in big, bold letters at the top of this column and just couldn’t turn away, its most dementedly absurd moments are every bit as glorious as you’d hope. I just wish there were more of them.

If you missed out on the HorrorPack-exclusive Blu-ray release, Killer Piñata is currently streaming on Prime Video. In a more perfect world, maybe I’d be saying the same about its sequel too. Alas, Killer Piñata 2: More of Them only raised a little over 10% of its goal on Kickstarter, so we’ll just have to wistfully dream about what might have been.