Catalog titles are still playing catch-up on Blu-ray, and out of print DVDs are getting hard to find. Luckily, there’s Netflix. “One From the Vault” is a recurring feature exploring the wide selection of movies that the Netflix instant streaming service has to offer that are out of print, unavailable, or just hard to find in other formats. For our first entry, I’ll take a look at the cult classic ‘A Boy and His Dog’.

Let’s get one thing out of the way right up front.  I love post-apocalyptic entertainment.  I love the aesthetic of entire towns built out of spare parts.  I love the idea of civilized man being taken back to his vicious roots.  I love roving bands of theme gangs.  The post-apocalypse is simply the finest time for a movie, video game, or a book to take place.

When most people think of the post-apocalypse, they think ‘Mad Max’, and why not?  Didn’t it set the tone for apocalyptic movies going forward?  Didn’t it break new ground?  It did if you never got around to seeing ‘A Boy and His Dog’.

Four years before anyone outside of Australia even knew who Mel Gibson was, a ninety-one minute science fiction classic was released to an unenthusiastic public.  ‘A Boy and His Dog’ did poorly in theaters, but it was generally well received by critics. 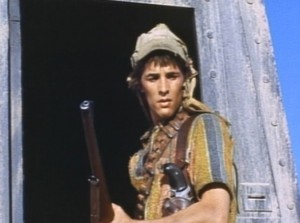 Don Johnson is the star of the film.  Yes, that Don Johnson.  He plays Vic, who’s just a normal guy trying to survive the harsh world with the help of his dog Blood, who communicates with him telepathically.  Blood also has heightened senses of smell and hearing, making him, according to Vic, “an experienced female provider.” Together they scrounge for food, and Blood puts up with Vic’s appetite for sex because it’s a lot easier to survive with a human in tow.

It all starts out as a fairly traditional tale of post-apocalyptic survival, though a bit darker than most.  Our hero in the movie, if Vic can be said to be a hero, is a thief, a rapist, a murderer, and a coward.  He has almost no redeeming traits, presumably because he survived without parents or formal education, save what the surprisingly well-read Blood is able to provide.

“So, a lone wanderer with a telepathic dog that helps him steal food and rape women,”  I hear you say, “is that all you got?”  Not by a longshot.  Once Vic and Blood encounter a young woman named Quilla, things start to get weird. 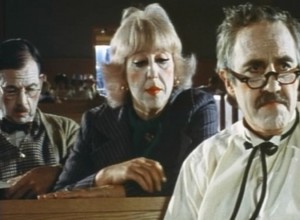 Quilla beds Vic willingly, and repeatedly.  She tells him of the strange place where she lives, knocks him out and leaves a key-card behind.  He’s an 18 year old guy, and she’s an amazing looking girl, so predictably, he follows her.

Here, Vic enters the Down under, which is an underground city full of wonderful things they don’t have above, like green grass, forests, and an organized society.  It’s also got creepy mime makeup and seemingly endless marching band music.  Oh, and since all the men are sterile, Vic is to be used for breeding and then put down.

If parts of the plot – a lone wanderer with a dog, underground societies, and general lawlessness – seem familiar, don’t be surprised.  ‘A Boy and His Dog’ was cited as the influence for similar films and even games.  The ‘Fallout’ series is the most obvious example.  As Jesse Heinig, who worked as a programmer and a designer in the original Fallout game puts it, “‘A Boy and His Dog’ inspired ‘Fallout’ on many levels, from underground communities of survivors to glowing mutants.” 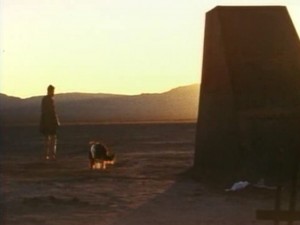 The film really paved the way for the post-apocalyptic genre, and added new levels of weirdness, taking things to a new level content wise.  It’s been accused of being misogynistic, and it does seem that way.

It’s important when watching the film to note that while you end up cheering for Vic, he really is the lesser of two evils, or possibly just the more familiar.  It’s almost as if author Harlan Ellison and director L.Q. Jones are asking us to pick the devil we know, over the devil we don’t.

It’s also important to know what you’re getting yourself into quality wise.  There’s never been a good looking version of this film.  The standard-definition picture is filled with film grain, the colors are washed out, and the sound is presented in mono.  It’s also in a 4:3 aspect ratio.  If that’s going to bother you, you’ll want to find the 2003 DVD by First Run Films.

‘A Boy and His Dog’ doesn’t take itself too seriously.  It’s a dark comedy with humor that may not be immediately obvious.  If you’re a fan of science fiction, the post-apocalypse, or just plain old weirdness, you owe it to yourself to see this classic. 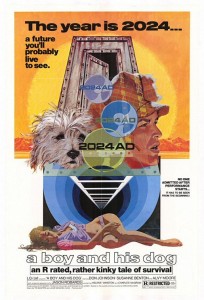 TagsBoy and His Dog Netflix One from the Vault