Thing I learned from doing this column: There really aren’t a whole lot of killer mummy movies anymore.

I’ve been scouring Netflix and Prime Video for months now! Skipping past documentaries, kid-friendly cartoons, $100 million-plus blockbusters, and stuff that’s not in HD (this is High-Def Digest, after all), the list pretty much begins and ends with Rage of the Mummy. 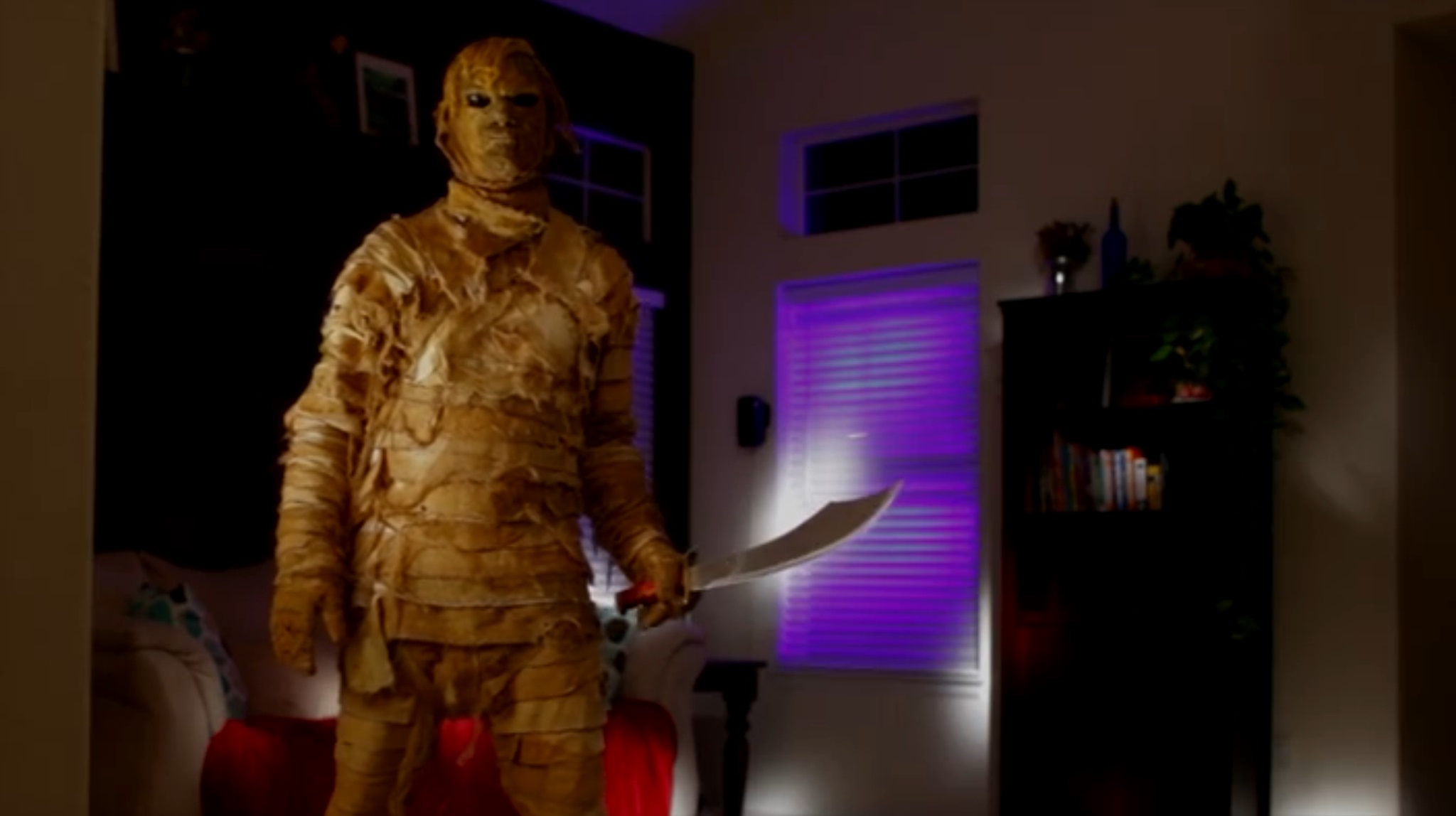 What’s making Prince Horus-Kan rage, exactly? Well, thirteen sacred relics must remain in his tomb for the long-dead prince’s soul to navigate the afterworld. Whenever someone swipes any of these priceless artifacts, the mummified corpse of Horus-Kan is awakened once more. A few “Hassan chop!“ slashes of a sword later, the defilers are decapitated and Horus-Kan’s spirit is back kicking it with the fire goddess Sekka in the afterlife.

When I tell you that Horus-Kan is currently skulking around Denver, you know he’s not there for an omelet. Having lugged his sarcophagus across the desert like some kind of Egyptian Django, and… I don’t know, somehow winding up in Colorado, Horus-Kan is there for the Pharaohs of Darkness. They sound a whole lot more ominous than they actually are. The group is really just a bunch of middle-class suburbanites fascinated by psychic phenomena, 13 of whom have dug into their piggybanks to fund a tomb raiding expedition. They believe in the power these artifacts wield, but kind of blow off the curse that goes with them, until… well: 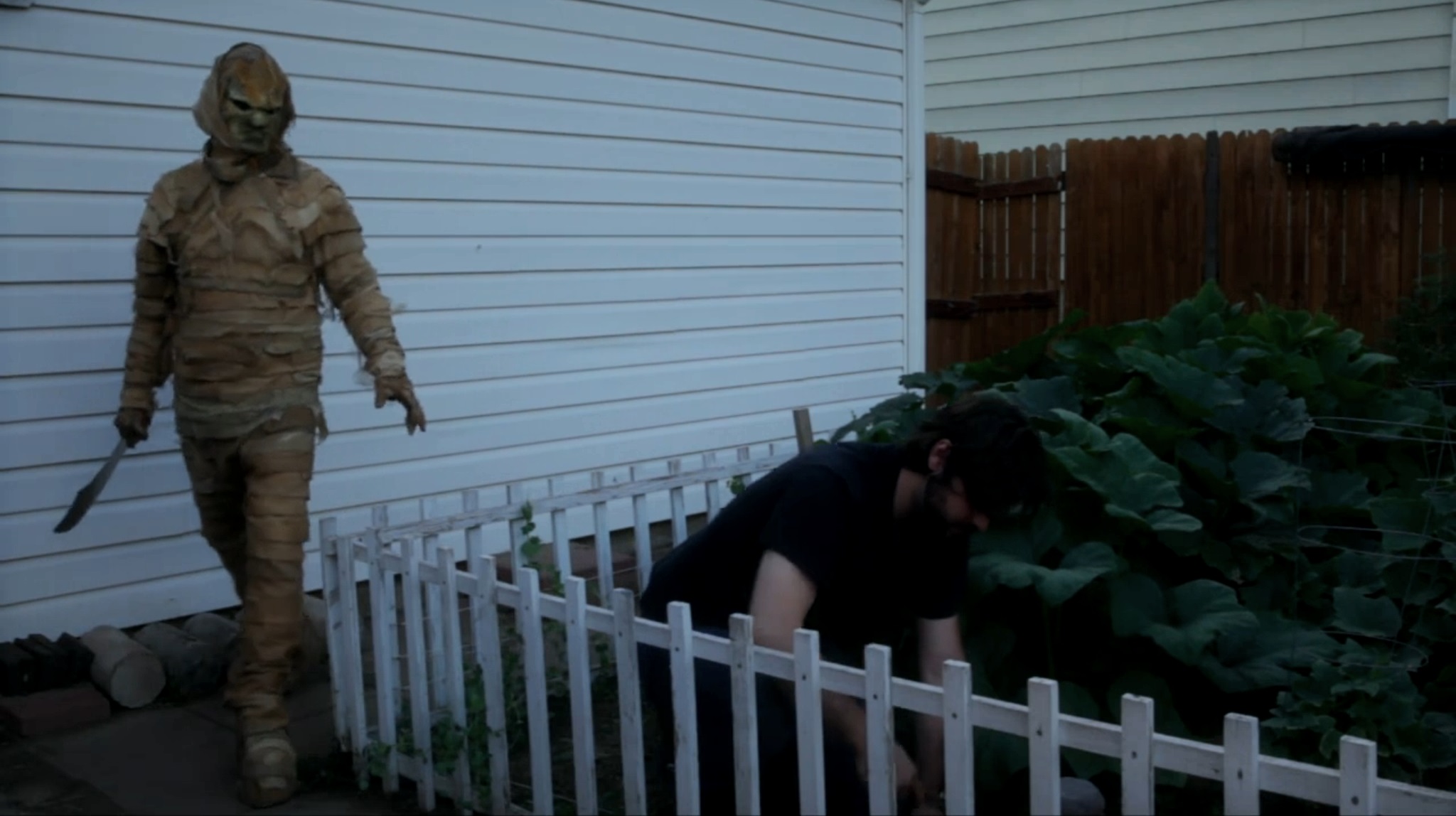 Rage of the Mummy hooked me immediately, with terrific opening titles inspired by classic monster movies as well as Creepshow-style comic book transitions. And, just as quickly, it lost me. Rage of the Mummy is too quick to settle for uninspired camp. By design, it’s not exactly trying to unnerve the audience, so the lack of scares or suspense isn’t all that surprising. At the same time, it too rarely revels in the absurdity of an ancient mummy’s reign of terror in suburbia. As one of the bidders is home alone, the mummy walks up behind him or her for a bloodless, off-screen kill. Afterwards, a couple of detectives mull over what these increasingly odd clues could possibly mean. Lather, rinse, and repeat a dozen times.

It’s one swing-and-a-miss after another. We’re told that Horus-Kan is a shapeshifter that can assume any form, but we only ever see him as a flesh-and-blood prince or a mummy. His reign of terror is almost completely interchangeable. Horus-Kan can blast linen wrappings from his fingers, he’s clutching a mean sword, and… yeah, that’s about it. The Pharaohs of Darkness each meet the exact same end in the exact same way. Rage of the Mummy occasionally remembers that some members of the cult wield psychic powers, but only once does that come close to amounting to much.

The mummy costuming and the design of the Egyptian tomb are both pretty slick, but that’s about as far as the film’s budget stretches. As stratospheric as the body count is, there’s literally not a single death on-camera. Sometimes you’ll see a shadow of a decapitation cast on the wall, but most of the time, the movie cuts away to G-rated rotoscoped art/animation. It’s clever once or twice, but after a while, I just want to see something – anything! – happen. Even the climax takes place off-camera! 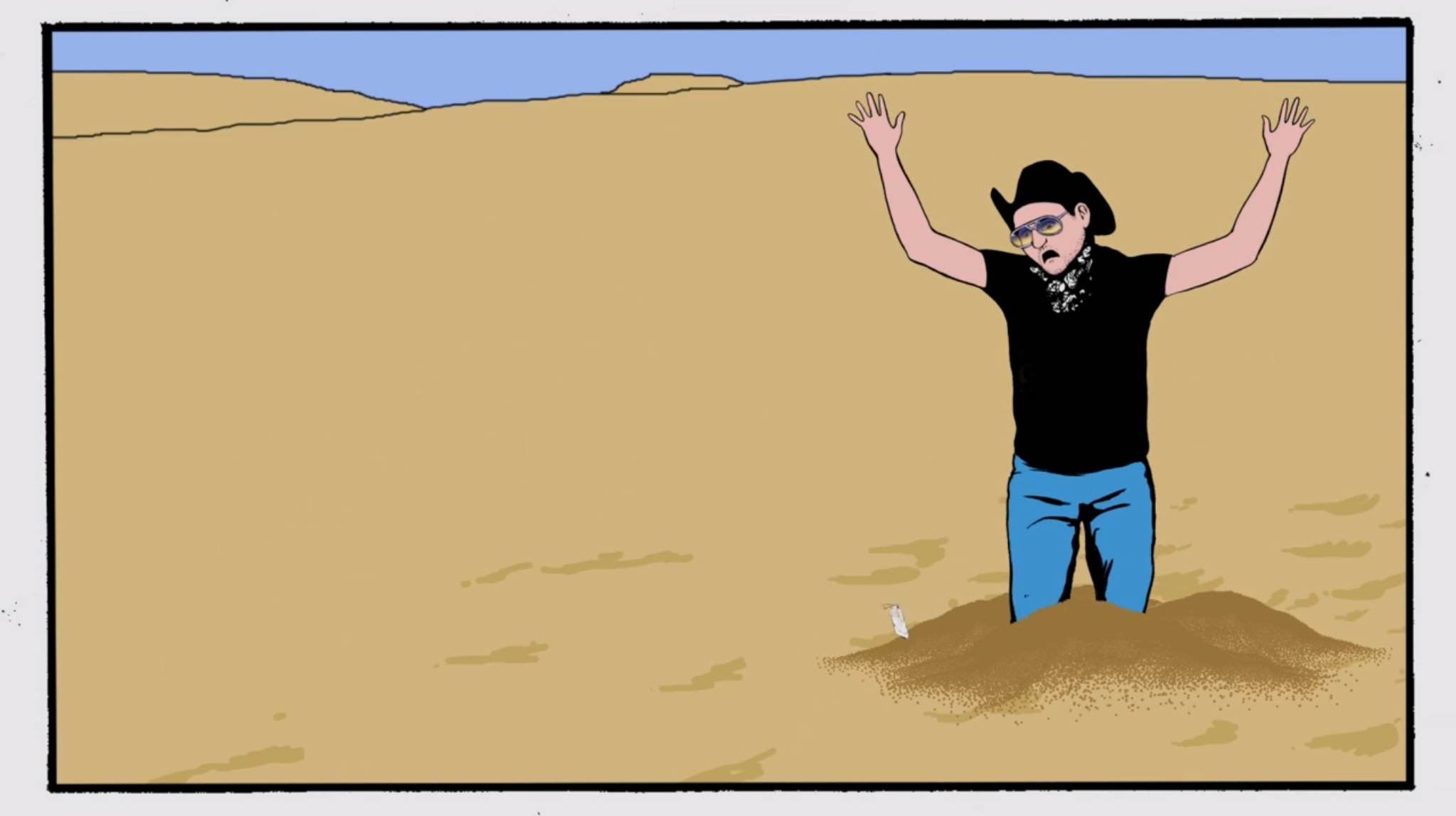 The pacing plods along just about from start to finish. The 13 cursed members of the Pharaohs of Darkness introduce themselves in the most literal way possible, spelling out their names, the artifact they’ve chosen (the specifics of which don’t matter), and their psychic area of interest (ditto). The animated transitions drag on for way too long. Some of ’em clock in at two minutes each, with random hieroglyphics sloooooooowly panning across the screen while Sekka writhes around with a fiery staff. It’s torture. There’s no energy propelling the attacks, with characters leisurely jogging away or throwing a balled-up doily or whatever at Horus-Kan, if they even see him coming at all.

Part of me feels guilty for ranting like this. The actors are clearly having a blast, even if I sometimes found myself wishing they’d dial it back a bit, like the Suthe’n’ Belle who giggles after every single line of dialogue. It’s a labor of love for filmmaker Dennis Vincent, who’s credited as writer, director, cinematographer, editor, animator, matte painter, regular ol’ painter, comic book artist, graphic artist, special effects artist, special effects makeup artist, set designer, set dresser, prop master, costumer, composer, and music performer. Oh, and he stars as the titular raging mummy to boot. It’s just that a movie about a mummy hunting psychics in Denver shouldn’t be this dull and forgettable.

Rage of the Mummy scored a DVD release a few weeks back, and it’s currently streaming on Amazon at no additional charge for Prime subscribers.

TagsAmazon Prime Video One Man's Trash Rage of the Mummy