If you’re a videogame fan, you probably subscribe to a podcast or two for your gaming news. I’ve got a few myself. They’re a great way to get insight, a few laughs and a sort of simulated conversation about your hobby. Whether you’re into 1UP, Giant Bomb, IGN, or even G4 – and whether you’re into the Xbox or the PS3 – there’s one podcast you need to be listening to over all else: ‘A Life Well Wasted.’

‘A Life Well Wasted’ is the best thing to happen to gaming podcasts in a long time. It’s like a mix between NPR’s ‘Radio Lab’ and ‘This American Life,’ but with an avant-garde flavor and a videogame theme. 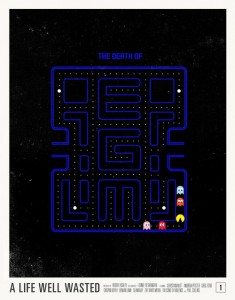 In each episode, host Robert Ashley has conversations with a few different people about one subject, or revolving around one theme. The conversations are edited down and put to original music, also created by Ashley.

The thing that’s great about the show, aside from the fantastic production value, is that it provides us with stories and ideas from places we’d never have thought to look. In the fifth episode, ‘Help,’ Ashley talks to people that try to do something with gaming besides just entertaining. In ‘Why Game?,’ the third episode of the series, he has a fascinating interview with a developer working on a game that went very bad very fast.

The most recent episode of the show was released on the 23rd of June. It puts a spotlight on ideas, how much they matter, and where we get them. It starts out with a series of ideas for games that fans had, all mixed into one and put to music. It’s odd, but interesting. The rest of the episode is decidedly not family friendly. It’s probably not work friendly either, depending on where you work.

There have been, since the first episode back in January of 2009, six episodes of ‘A Life Well Wasted.’ That’s an average of one every three months. But it’s been a significantly longer wait between the last two. That’s fine, really. Each episode of ‘A Life Well Wasted’ is rich with detail of information and of sound. It really does take a few listens to get all of it.

In addition to some brilliant episodes, there’s also a limited edition poster that’s released with each episode from Olly Moss, a favorite of mine.

The episodes are free to download from iTunes or directly from the ‘A Life Well Wasted‘ website. I suggest starting at the beginning, with an episode that came out just after one of the recent game media shakeups entitled ‘The Death of EGM.’

Check out the show, you’ll be glad you did.