Things wrapped up for NBC’s Thursday night comedy lineup this week.  It was a pretty strong showing all around.  If you watched these on Hulu or skipped through the commercials, you missed out the real highlight of the night.

‘Community’ got a finale full of drama, romance, and some closure. The problem with ‘Pascal’s Triangle Revisited’ is that it seems, for the most part, to lack jokes.  The episode moved really quickly and jumped right back into the Britta vs. Slater competition for Jeff.  It was an all-too-typical close to an atypical season.

There were a few solid moments, including Abed turning off the study room lights over and over while trying to get his closing line just right.  Pierce got a great moment as well, with his banana joke.  But aside from that, most of the show was either not funny or really obvious, like the Tranny Queen gag.

When it all comes down to it, ‘Pascal’s Triangle Revisited’ just didn’t feel like an episode of ‘Community.’

When ‘Parks and Recreation’ works, it really works.  ‘Freddy Spaghetti’ was the best episode of the night by far.  It reinforced and strengthened the characters we know and allowed for a lot of great comedy.

Leslie’s bad jokes and cheesy lines are on top form this episode.  A personal favorite: “Mark Brendanaquits.”  And in the long run, she gets a victory.  The site of the former pit gets used for an unofficial park function, she gets support from Ron and a sort of a bench reunion with Mark.

Whoever decided to throw Rob Lowe into the mix was brilliant.  His ten mile sprints, constant name repetition, and positive speeches that end with a look to Ben and then “Aww, Ben says we can’t!” fit the show beautifully.

Oh, and Ron’s run and fall was hilarious.  I don’t know if it was intentional or not, but I laughed hard.  The man has a gift.

It’s been a while since I’ve been able to say this, but I honestly enjoyed ‘The Office’ last night. It didn’t feature too heavily on one character, and Michael actually seemed to grow by the 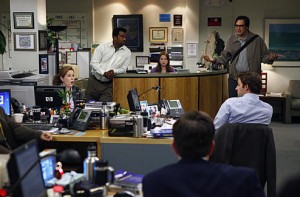 Jo (Kathy Bates) made her return in the episode, and it’s about time.  She’s a great character, she’s funny, and she brings something to the show that no one else does. In her private jet, we learned more about Jo, and Michael revealed that he hasn’t been having the greatest year.  Was that a secret apology for the quality of the season?

The suspicion within the office about the whistleblower was solid, the IT guy saying his goodbyes was funny and revealing, and the idea of Dwight buying the office complex could lead to some great things in the next season.

It also looks like Holly will be coming back, which is great.  ‘The Office’ needs a happy Michael to work right. 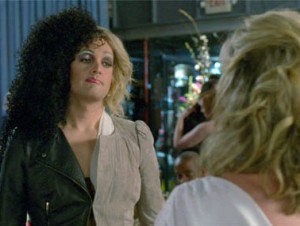 I wasn’t expecting a lot after the buildup episode, but I’m glad to be wrong.  ‘I Do Do’ was funny, smart, and included yet another great guest star.

So Liz didn’t end up with Wesley, but instead started a relationship with Matt Damon.  Not a bad trade up!  Damon, as Carol, did a great job and proved that he’s got some comedy chops to go with all of that acting talent.

The Jack/Avery/Nancy thing finally wrapped up, which is fantastic.  Avery is apparently pregnant, which could go either way.  Putting a baby in the mix is usually a sign for disaster, but since it’s not the main character’s baby, it might not be so bad.

Will Forte was back as the cross dressing Paul and, as usual, he was fantastic.  Jenna lays down the ultimatum of choosing between her and Cher, but Paul goes with a compromise, ending up as a combination of both.

‘Community’ wasn’t particularly funny, but it had one of the funniest moments of the night care of a ‘MacGruber’ Public Service Announcement.  There was one in each of the four shows, and all of them were great.

If you skipped the commercials when you watched the shows last night, you may want to go back and check them out.  As far as you Hulu folks go, I haven’t seen the MacGruber PSAs online yet, but I’m sure someone will have them up on YouTube before too long.