As far as newly-premiering shows go, the summer TV season has been kind of a bust so far. Two series that I thought looked promising, ‘The Good Guys‘ and ‘Scoundrels‘, haven’t lived up to their potential. I’ve continued to record ‘Good Guys’, but let the last few episodes get backlogged on my DVR. I don’t feel an urgent need to catch up right away. After three episodes of ‘Scoundrels’, I’ve decided that it’s just kind of boring and isn’t likely to get better. I doubt I will recap either one further. (‘Persons Unknown‘ has been the rare bright spot among the new batch of shows.) But I’m still willing to give anything a shot. Which brings us to A&E’s new police procedural, ‘The Glades’.

‘The Glades’ premiered back on Sunday, July 11th. By the time you read this, a second episode will have aired. I’m writing this in advance of that, and haven’t caught up that far yet. I’ve only seen the first episode, simply titled ‘Pilot’. Comcast offers back episodes On Demand, and I’m sure other cable/satellite providers do as well. You can also watch it on the A&E web site. So it shouldn’t be that difficult to catch up if you’re still interested.

The show comes from the producers of the USA series ‘White Collar’. This one’s about hotshot Chicago detective Jim Longworth (Australian soap star and underwear model Matt Passmore) who moves to Florida after an incident at his old job. It seems his former captain shot him in the butt. Now he’s working in the fictional town of Palm Glade on the edge of the Everglades. The golfing is nice, but his partner Mike (John Carroll Lynch from ‘The Drew Carey Show’) is weary and burned out from being a cop, and doesn’t like Jim very much.

And, really, that’s about all the set-up you need. Beyond the specifics of its premise, this is a very formulaic “murder of the week” procedural that follows the template of countless TV dramas before it, from ‘Monk’ to ‘Psych’ to ‘The Mentalist’ to ‘Bones’ to ‘Castle‘ to… Well, you get the idea. Take a quirky lead character, plop him in a colorful setting, and give him a new outlandish case to investigate in each episode. Wash, rinse, repeat.

‘Pilot’ doesn’t really feel much like a series pilot. The episode begins with all of the characters already in place, and fills in the backstory with some awkward voiceover during the opening credits and a few dialogue scenes that were probably tacked-on late in production. I have a feeling that the network dumped the original pilot and made the writers rework the second episode at the last minute.

The case in the premiere involves a couple of teenagers who discover a headless female corpse in a swamp. There’s also been an outbreak of graffiti in town, which Mike believes is related. Jim isn’t convinced. Later, it’s discovered that a substitute teacher at the teen girl’s high school has gone missing. Meanwhile, Jim spends most of the episode flirting with a pretty nurse (Kiele Sanchez, the infamous Nikki from Season 3 of ‘Lost’), who has a young son and whose husband is in prison.

The thing about the show is that Jim is supposed to be a charming rogue. He’s always got a smart aleck quip for every situation. He’s never afraid to speak his mind, no matter the possible repercussions. And he likes to play pranks. The episode has a running gag where he’s set up crime scene tape around his ball on a golf course so that he can resume his game after the case is finished. 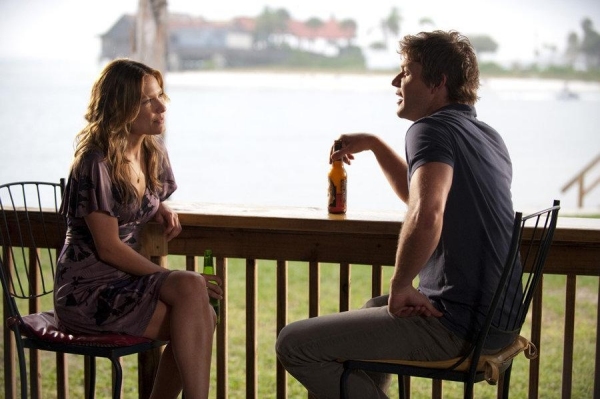 The problem is that Jim is really just kind of a dick. His smug condescension to everyone around him is more off-putting than endearing. He harangues his partner, often undeservedly, just to show off how much smarter and how much better of a cop he is than everyone else. There’s also a scene in the pilot where he brashly shoots an endangered alligator so that he can retrieve evidence from its stomach. Is that supposed to be funny? It’s not.

Where the pilot episode sort of redeems itself is the resolution to the week’s murder plot. [Spoilers to follow.]

It turns out that the missing teacher was just a red herring. Jim’s partner Mike was the killer all along. He murdered his wife and dumped the body in the swamp, hoping a gator would destroy the evidence. Jim’s confrontation with Mike is nicely played, and finally puts his assholish attitude to good use. “Why should I take shit from you?” Mike asks. “Because I’m a better cop than you.” And, indeed, he is.

That’s a nice, unexpected twist. The episode had set us up to sympathize with Mike. He seemed to be a decent, well-meaning guy, and I kind of felt bad for him having to put up with Jim’s cocky bullshit all the time. Making him the killer was something I didn’t predict, yet makes plausible sense and is consistent with the rest of the episode. As we realize that Jim had figured this out well in advance, we finally come to respect his skills as a detective a little.

On the other hand, with Mike out of the way, future episodes will lack the dynamic of their relationship, and will just give Jim free reign to be a pompous jerk again. This was a good twist, but it’s just a single-episode plot point, and will have little to no bearing on the direction of the rest of the show. I doubt every episode will come up with something so surprising. If they even try to, that in itself will come to be predictable.

So, despite liking the episode’s ending, I’m still not sold on ‘The Glades’. It’s too similar to too many other, better shows.

The next new summer series I’ve been holding out hope for: ‘Covert Affairs’. Recap coming soon.